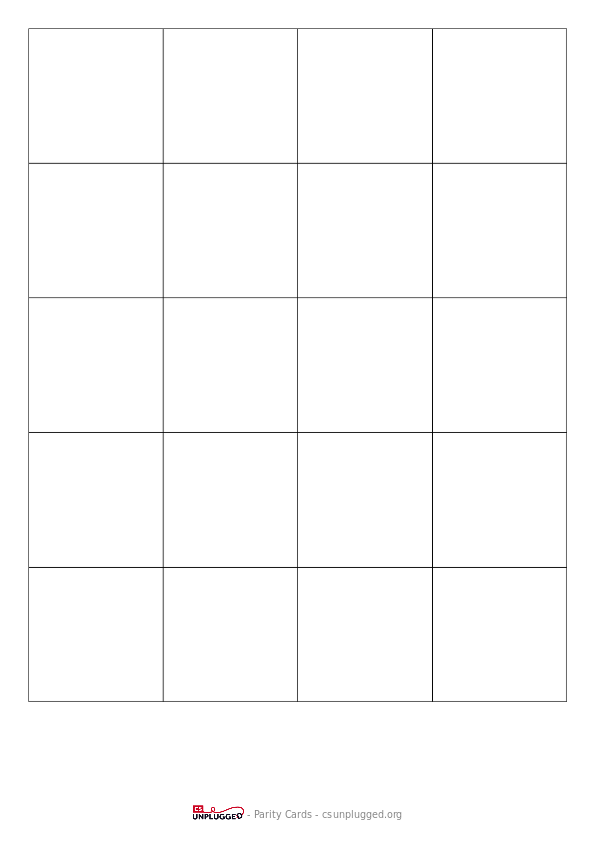 Two pages of parity cards per pair of students.

Potential answers could include:

Students may come up with situations where computers won't read a disc or scan a code, but they may also confuse this kind of problem with other kinds of failures such as an error in a program or a flat battery.

Adults use computers for important things like banking, writing school reports, and communicating with each other. If the information being stored got changed without anyone knowing, you'd get the wrong balance in your account (too much or too little), the wrong grade in your report, or the wrong message in an email. Or worst still the website you are wanting to go to for your learning or the DVD you want to play won’t work! This activity will look at how computers correct this automatically.

The last parity bit placed is useful because it will always work for both the column and row; if it doesn't match for both the row and column then you'll have made a mistake with one of the cards, and should go back and check them (try to not make it obvious that you're doing that).

Teacher to student: "I'd like you flip over one card while I cover my eyes".

Teacher to class: "Keep a close eye on which card it is to check if I have done my magic trick correctly!"

After the class confirms that a single card has been flipped, turn around to look at the cards. Scan the cards looking for the row with an odd number of black squares, and the column that has an odd number of black squares. The card that has been flipped will be at the intersection of these two lines. Turn this card over casually to restore it to the correct colour, saying “it’s this one”.

You can make a fuss that it might have been a fluke, so repeat the trick again. (After you put the card back to how it was originally, look away again and ask for another card to be flipped over.)

Teacher to class: "Let’s first look at the cards before one was turned over" (make sure you've restored the card that was just flipped). The following steps will help the students to uncover what you've done:

Teacher to class: “What do these numbers have in common?”. Students should be able to observe that they are all even numbers. If they need a hint, you could ask if there are any odd numbers there.

Let’s now look at the columns:

Teacher to class: “So how did we end up with an even number in every row and column - did the volunteer choose that?” (they didn't!).

Continue doing this for each row; then do it for the columns. This is a good exercise for students thinking about even and odd numbers. For the last (corner) card, ask if you should use the row or column to decide it. They should observe that it's the same for both.

Once the extra row and column have been added, ask “So what happens when I turn a card over from black to white?” (It reduces the number of black cards by one, so it's now an odd number). "What if I change a white card to black?" (it adds one, which also gives an odd number).

The students might work out from this how to find the flipped card, but in either case, have a student come up, and ask them to look away while you flip a card. Then, when they look back, ask "Is the first row ok?" (They should notice that it's still even, so hasn't been changed). Carry on for each row until they identify the one with an odd number of black cards. Draw a box around that row, and say "So one of these cards was flipped?". Now do the same with the columns - ask if each one is correct, then draw around the column that they identify.

Now ask "So which card was flipped?" Usually students will identify the one at the intersection.

Try using other objects. Anything that has two easily distinguished 'states' is suitable. For example, you could use playing cards, coins (heads or tails) or cards with 0 or 1 printed on them (to relate to the binary number system).

What happens if two, or more, cards are flipped? (It is not possible to detect exactly which two cards were flipped, although it is possible to tell that something has been changed. You can usually narrow it down to one of two pairs of cards. With 4 flips it is possible that all the parity bits will be correct afterwards, and so the error could go undetected.)

Another interesting exercise is to consider the lower right-hand card. If you choose it to be the correct one for the column above, then will it be correct for the row to its left? (The answer is yes, always. In this card exercise we have used even parity—using an even number of black cards. Can we do it with odd parity? (This is possible, but the lower right-hand card only works out the same for its row and column if the numbers of rows and columns are both even or both odd. For example, a 5 × 9 layout will work fine, or a 4 × 6, but a 3 × 4 layout won’t.)